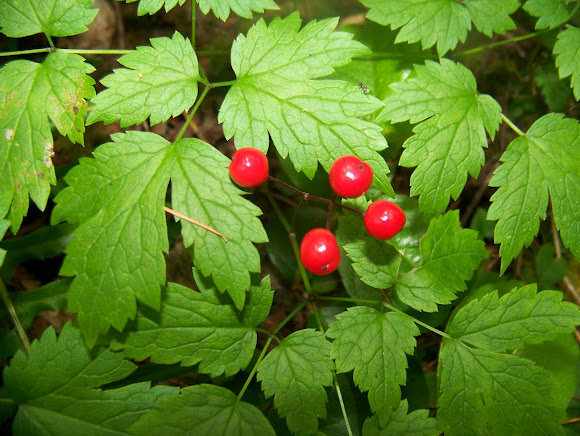 "These open woodland plants grow 40 cm (16 in) to 80 cm (31 in) tall. The leaves that are coarsely toothed with deeply lobed margins. Plants commonly have hairy veins on the undersides of the foliage. Each stem will have either three leaves that branch near the top, or will have three compound leaves and one upright flowering stalk from one point on the main central stem. Plants produce one to a few ternately branched stems which bear clusters of flowers having 3 to 5 sepals that are petal-like and obovate in shape and remain after flowering. The petals are deciduous, falling away after flowering is done. They are clawed at the base and 2.5 mm to 4 mm long and spatulate to odovate in shape. Flowers have numerous stamens and they are white in color. After flowering green berries are produced. The fruits are ellipsoid shaped berries containing several seeds. Seeds In mid to late summer, the berries turn bright red or white (forma neglecta). The berries also have a black dot on them."

"They are found growing in shady areas with moist to wet soils, open forest or dry slopes."

"All parts of the plant are poisonous. However, accidental poisoning is not likely since the berries are extremely bitter. The berries are the most toxic part of the plant. A healthy adult will experience poisoning from as few as six berries. Ingestion of the berries causes nausea, dizziness, increased pulse and severe gastrointestinal discomfort. The toxins can also have an immediate sedative effect on the cardiac muscle tissue possibly leading to cardiac arrest if introduced into the bloodstream. As few as two berries may be fatal to a child." "The following illustrates a non-fatal case of experimental self-intoxication produced by the ingestion of fruit from Actaea rubra. The onset of symptoms began within 30 minutes. "At first there was a most extraordinary pyrotechnic display of blue objects of all sizes and tints, circular with irregular edges; as one became interested in the spots a heavy weight was lowered on the top of the head and remained there, while sharp pains shot through the temples. Then suddenly the mind became confused and there was a total disability to recollect anything distinctly or arrange ideas with any coherency. On an attempt to talk, wrong names were given to objects, and although at the same time the mind knew mistakes were made in speech, the words seemed to utter themselves independently. For a few minutes there was great dizziness, the body seeming to swing off into space, while the blue spots changed to dancing sparks of fire. The lips and throat became parched and the latter somewhat constricted; swallowing was rather difficult; there was intense burning in the stomach with gaseous eructations, followed by sharp colicky pains in the abdomen and also pain across the back over the kidneys. The pulse rose to 125, was irregular, wiry, tense; the heart fluttered most unpleasantly. These symptoms lasted about an hour and were followed by a feeling of great weariness, but in three hours from the time of taking the dose all seemed to be again normal"