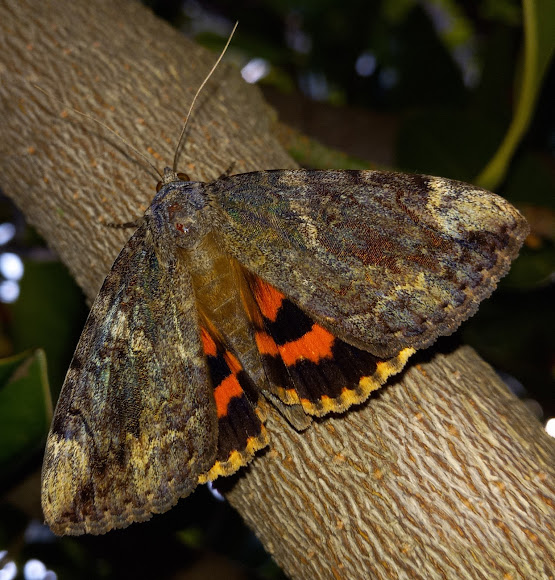 It is a large moth in the family Erebidae, and in the genus Catocala. The species Catocala innubens has brown forewings with small black and white patterns, while being identified by the prominent white patch at the corner of both forewings, and also the underside, which has red only at the lower portions of the hindwings, while other species in the area like Catocala umbrosa having red on all of the underside wings. It also has a differently shaped white spot in the middle of the forewing, as well as a smaller size compared to the species umbrosa and ilia.

Southwestern Arcadia park area, Fort Worth, Texas. Tarrant county, (sub-urban area). Larval,and adult stages were lured in by bait traps, otherwise like to hide in the woods, where they can hide among tree bark. Here is my photo of a different species called Catocala maestosa, https://www.projectnoah.org/spottings/18...

In the species Catocala innubens there are two distinct forms. One of the forms is "scintillans", which is prominently black on the forewings with white edged margins. The second form is the regular form, which looks like the one in my photo. Here is a photo of the form "scintillans", (https://bugguide.net/node/view/838269). The distribution of this species ranges from Southern Ontario and Quebec to Florida, west to Texas, Wisconsin and Minnesota. The larval food plants for this species is primarily Honey Locust, (Gleditsia triacanthos), but it also mentions Walnut, (Juglans sp.) but this is probably a bad host for them.