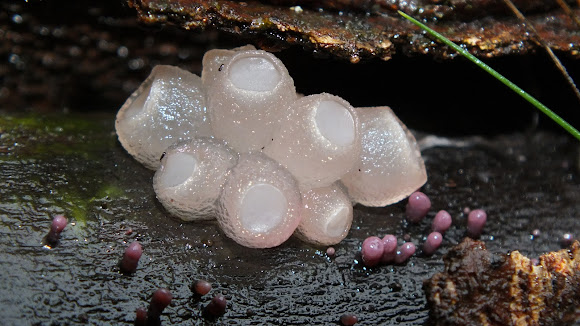 Pinkish-ochre, gelatinous fruitbodies initially shaped like spinning tops but eventually distorting as they push up against one another in groups, becoming more cup-like. This species is quite variable in size, the individual cups being typically 0.4 to 1.5 cm across and up to 8 mm tall. A brain-like form, Neobulgaria pura var. foliacea has a folded structure.

First four photos are of a young specimens, the last two are of an older specimens. Spotted in Paleispark 't Loo in rural area of Apeldoorn, Holland. (sources:see reference)

Thank you, Ashley and PN for this great honor. @ Thank you too sunnyjosef, Martha, Antonio and venusflytrap for the kind comments :)

Congrats again Jae, your unique Beech Jellydisc placed 3rd in the fungi category for the Best of 2015! Here is the link for the '2016 Best Wildlife Photo mission so you can add more fantastic spottings for this year! www.projectnoah.org/missions/2004046002

Thank you, Ashley and PN for this great honor.

Congrats Jae, your awesome Beech Jellydisc has made the top 10 fungi spottings in the '2015 Best Wildlife Photo' mission! Rangers are voting on the top 10 fungi spottings, and the top 3 will be announced on February 4th. The top 3 spottings will be commented on here on the site, but make sure you keep a look out on our Facebook app page for the announcement as well! Congratulations on making the top 10! https://www.facebook.com/projectnoah

Great series and congrats on the SOTD!

Wow thank you for the kind words and likes everybody. All credits ofcourse goes to Mother Nature :)

Congrats Jae! And thanks for all your amazing fungus contributions!

Hey they have a similar common name with American Beech

Congrats Jae, this neat fungus has been chosen as Spotting of the Day!