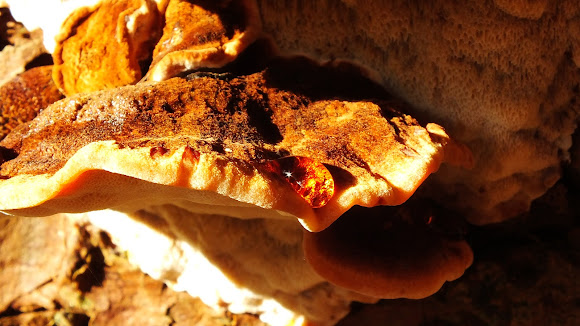 About 20 shelf fungi with zonate caps, rusty brown to brown and a white margin. Ranging in size between 6 - 15 cm. The undersurface had white pores, slighty orange at the margin and some rusty brown discolorations. Golden brown guttation droplets. Possibly Ischnoderma benzoinum.

On a dead conifer (unidentified species) tree in the border zone of a mixed forest and conifer forest.

Last year I spotted, on the same dead conifer tree, what I believe is the same species of fungi. See here: http://www.projectnoah.org/spottings/877... Except this time the fungi grew on the other side of the log. Spotted in National Park Veluwezoom, Holland.