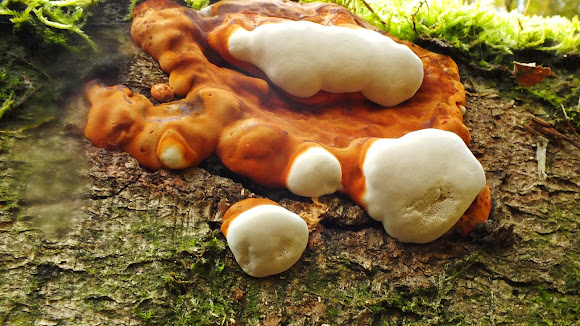 This sombre fungus usually appears as a solitary specimen but occasionally two or more tiers are produced. On standing timber this bracket sometimes gains a hold in clefts in the trunks of older trees. Annual layers of tubes build up to produce a large hoof-shaped structure 10 to 40 cm across and up to 20 cm deep at the centre of the attachment line. After the first three or four years, brackets increase steadily in thickness but do not grown much in diameter - hence the resulting hoof shape. The upper infertile surface is various shades of grey, often with a brownish growing zone towards the outer edge. The lower fertile surface is white or greyish, turning slightly brown when bruised. Inside the fruitbody the flesh is hard and pale brown, while the tubes are pale grey-brown at first but become darker brown with age. The pale spore-bearing surface is noticeably softer and has minute pores typically spaced at 2 to 3 per mm.

Fomes fomentarius is parasitic on broadleaf trees, particularly birch and less often beech and sycamore, but continuing to grow for many months as a saprobe on dead trunks.

I think this is the tinder fungus, but I could be mistaken as it is still a young specimen. Fomitopsis pinicola, the red-belted bracket, can look similar at this stage. Also both species can occur on birch trees, which this fungus grew on. Spotted in National Park Veluwezoom, Holland. (sources:see reference)

Strange looking stuff, Jae. Thanks for sharing these great photos.

This fungus looks like something you would see in an old black & white 1959 horror flick. The Fungus that ate New Jersey. LOL........