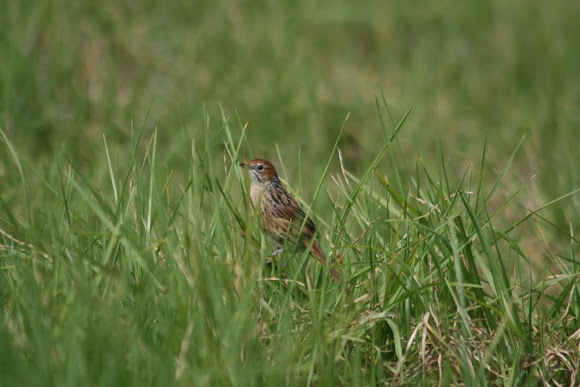 The Cape Grassbird is 17–19 cm long and weighs around 30 g. Its crown and face sides are rufous, except for white around the eye, and it has black malar and moustachial stripes on its white throat. The upperparts are brown with heavy streaking and the long tail is a lighter brown. The underparts are whitish with blackish spotting. The sexes are similar, but the juvenile has a streaked cap and is duller than the adult. The song is jangling and musical, and the call is a nasal pheeeo. The long, pointed, straggly tail, chestnut cap and facial stripes are diagnostic of Cape Grassbird. It is much larger than any cisticola, and the heavily streaked back and the pointed tail eliminate confusion with Moustached Grass Warbler.

The Cape Grassbird breeds in southern Africa in South Africa, Lesotho, Mozambique and Swaziland with an isolated population in eastern Zimbabwe. It is a common species of coastal and mountain fynbos and long, rank grass on mountain slopes or in river valleys

This was an adventure trying to find this guy ;-)