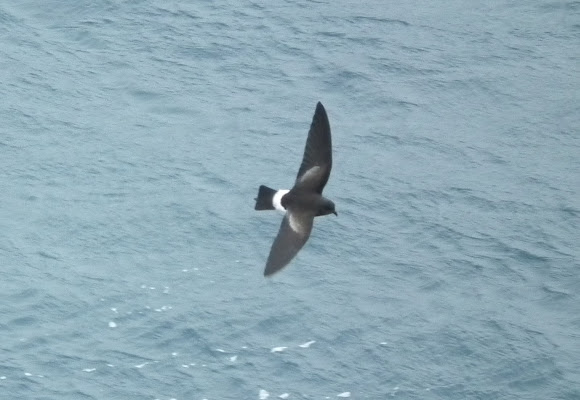 A very small seabird, no bigger than a blackbird. It is very quick and agile in the air, and despite its small stature, handles strong winds exceptionally well. Identified from other similar storm petrels by the white rump and stripes on the upper sides of the wings, while having a completely dark underside. It has an interesting feeding strategy, where it flies into the wind, glides just above the water's surface, then sticks its legs out and "runs" along the water. You can see this in the last picture!

Open water, comes to land for breeding (around Antarctica). Very common and found throughout the Southern Hemisphere.

These little birds were very hard to get photos of. On this particular day we were on the edge of a pretty nasty storm, so were trying to get behind South Georgia as a sort of shield. But it meant the winds were very strong, and was the one time these little storm petrels actually demonstrated their hovering ability, and came close enough to our ship that I could actually get pictures. They really look like they're too small to be out in the open ocean!