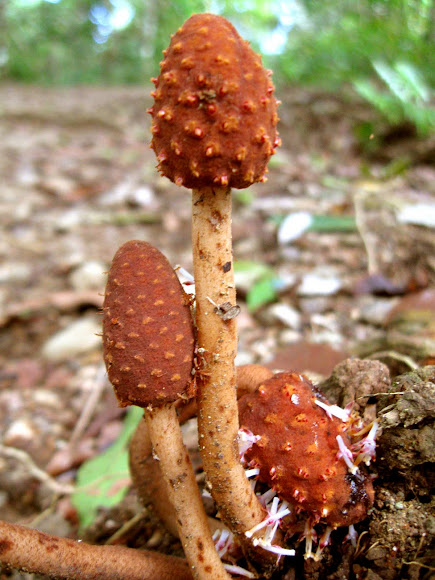 This mysterious mushroom-like thing, apparently a rare and endangered species, is a parasitic plant that gains all its nutrients from the roots of plants (host species: Inga sp. and Boehmeria sp.). It took me ages to find anything about it online, so here is most of it: This 10 cm tall non-green flowering plant (Angiosperm) gets all its nutrients from an underground tuberous connection to the roots of its host (Inga sp. or Boehmeria sp.) and it doesn't emerge until it is ready to flower and fruit--so I was lucky to spot it. (some great photos here -- http://www.gdfcf.org/rain-forest). It has been seen at night covered with ants, so it is thought it is pollinated by them. You can see from the photos that it looks more like a mushroom than anything else. Herardo Rivera, the lodge naturalist, identified it for me.

It grows in the moist slopes of the hills in old-growth undisturbed rainforest of Central and South America. I found it in a relatively open area, and you can see from the withered stems on the ground in photo #4 that it had already bloomed more than once.

Among the Surinam Tirio, smoke from burning plant is wafted over an arm or leg wounded by snakebite. It is a rare plant, on the list of species Biodiversity RS project (http://www.biodiversidade.rs.gov.br ) and in danger of extinction.

Very interesting. Thanks for sharing.