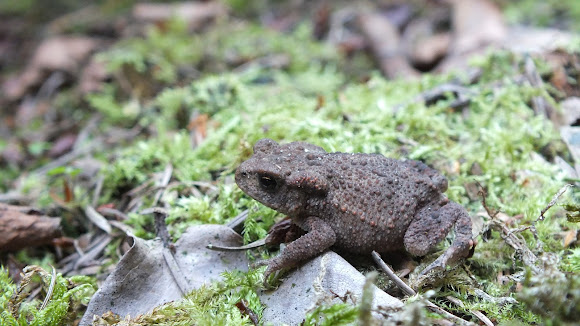 Common toads vary from dark brown, grey and olive green to sandy-coloured. They have broad, squat bodies and warty skin. They tend to walk rather than hop. Common toads excavate a shallow burrow that they return to after foraging for prey. They secrete an irritant substance from their skin and puff themselves up to deter predators. Common toads tend to live away from water, except when mating, and hibernate during the winter in deep leaf litter, log piles and in burrows. During mating, the male clutches the female from behind in a tight embrace. He fertilises the long, triple-stranded strings of eggs as she lays them among the waterweeds. Tadpoles hatch after about 10 days and gradually change completely, or metamorphose, into toadlets over two to three months. Common toads can live up to around 10-12 years.