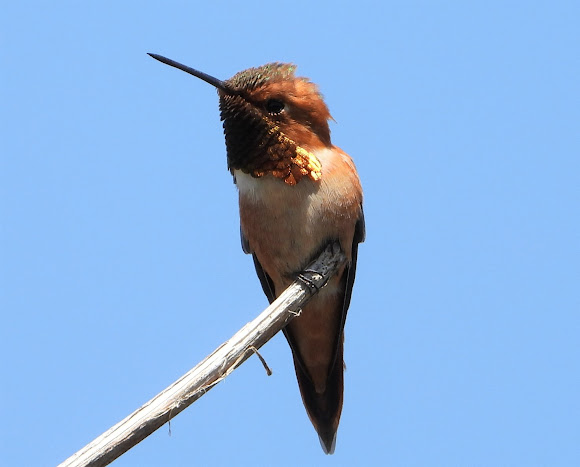 Males are mostly rufous with a white chest. Small and compact hummingbirds that are about 8 cm (3.1 in) long with a long, straight, and slender bill.

Spotted in central Washington on the east slopes of the Cascades. A mix of pine forest and shrub-steppe.

Conservation notes from Wikipedia: In 2018, the rufous hummingbird was uplisted from least concern to near threatened on the IUCN Red List, on the basis that due to its reliance on insect prey during the wintering season, it will be heavily affected by the global decline in insect populations due to pesticides and intensified agriculture. Due to climate change, many flowers that the rufous hummingbird feeds on during the breeding season have started blooming two weeks prior to the birds' arrival to their breeding locations, which may lead to rufous hummingbirds arriving too late to feed on them.