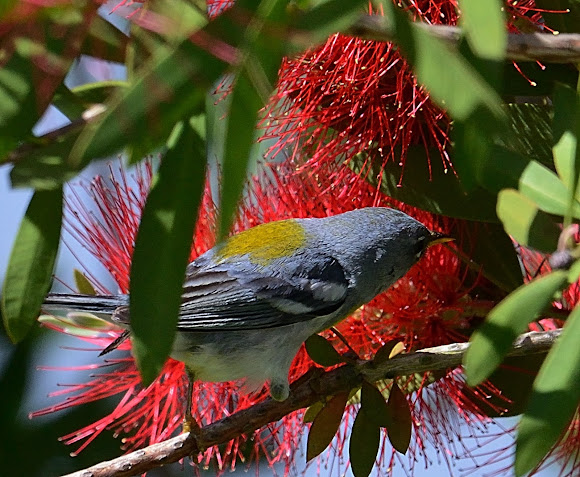 migrating thru High Island, TX. •Blue-gray hood and wings. •Yellow chest with black and reddish band across it. •White crescents above and below eyes. •Green back. •Two white wingbars.

Northern Parulas breed in mature forests along streams, swamps, and other bottomlands. They're closely associated with epiphytic plants that grow on the branches of canopy trees. In the southern U.S. they use Spanish moss; farther north they use beard moss. Key tree species include water, willow, and swamp chestnut oak, black gum, eastern hemlock, sugar and red maple, birches, and sycamore On its tropical wintering grounds, parulas use many habitat types including fields, pastures, scrub, woodland, and coffee, cacao, and citrus plantations.

thanks Maria...I wished for the bird to turn around for me so I can get its head but no luck but at least it is counted as a spotting