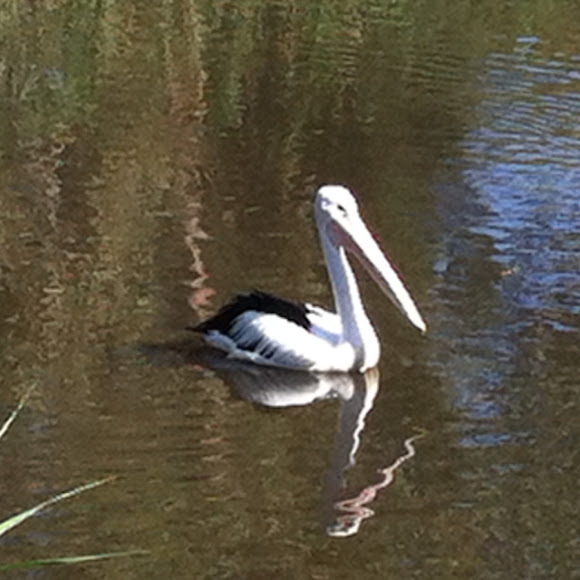 Identification: There are seven species of pelicans in the world, all of which are similar in shape and, with one exception, are primarily white in colour. Males are larger than females. The most characteristic feature of pelicans is the elongated bill with its massive throat pouch. The Australian Pelican's bill is 40 cm - 50 cm long and is larger in males than females. Size Range: 1.6 - 1.8 m long, 2.3 - 2.5 m wingspan

Seasonality: Pelicans are highly mobile, searching out suitable areas of water and an adequate supply of food. Pelicans are not capable of sustained flapping flight, but can remain in the air for 24 hours, covering hundreds of kilometres. They are excellent soarers and can use thermals to rise to considerable altitudes. Flight at 1,000m is common, and heights of 3 000 m have been recorded. By moving from one thermal to the next, pelicans can travel long distances with a minimum of effort, reaching air speeds of up to 56 km/hour. Feeding and Diet: Pelicans mainly eat fish, but they are opportunistic feeders and eat a variety of aquatic animals including crustaceans, tadpoles and turtles. They readily accept 'handouts' from humans, and a number of unusual items have been recorded in their diet. During periods of starvation, pelicans have been reported capturing and eating seagulls and ducklings. The gulls are held under water and drowned before being eaten head first. Pelicans will also rob other birds of their prey. The bill and pouch of pelicans play an important role in feeding. The bill is sensitive and this helps locate fish in murky water. It also has a hook at the end of the upper mandible, probably for gripping slippery food items. When food is caught, the pelican manipulates it in its bill until the prey typically has its head pointing down the pelican's throat. Then with a jerk of the head the pelican swallows the prey. The bill is delicately built. The lower jaw consists of two thin and weakly articulated bones from which the pouch hangs. When fully extended, the bill can hold up to 13 litres. The pouch does not function as a place to hold food for any length of time. Instead it serves as a short-term collecting organ. Pelicans plunge their bills into the water, using their pouches as nets. Once something is caught, a pelican draws its pouch to its breast. This empties the water and allows the bird to manoeuvre the prey into a swallowing position. The pouch can also serve as a net to catch food thrown by humans, and there are sightings of pelicans drinking by opening their bill to collect rainwater. The Australian Pelican may feed alone, but more often feeds as a cooperative group. Sometimes these groups are quite large. One group numbered over 1,900 birds. A flock of pelicans works together, driving fish into a concentrated mass using their bills and sometimes by beating their wings. The fish are herded into shallow water or surrounded in ever decreasing circles. Mating and Reproduction: Breeding depends on environmental conditions, particularly rainfall. Pelicans are colonial breeders with up to 40 000 individuals grouping on islands or secluded shores. Breeding begins with courtship. The female leads potential mates (two to eight or more) around the colony. As the males follow her in these walks, they threaten each other while swinging their open bills from side to side trying to attract the female's attention. The males may also pick up small objects, like sticks or dry fish, which they toss in the air and catch again, repeating the sequence several times. Both sexes perform &quot;pouch-rippling&quot; in which they clap their bills shut several times a second and the pouch ripples like a flag in a strong breeze. As the courtship parade progresses, the males drop out one by one. Finally, after pursuits on land, water or in the air, only a single male is left. The female leads him to a potential nest site. During the courtship period, the bill and pouch of the birds change colour dramatically. The forward half of the pouch becomes bright salmon pink, while the skin of the pouch in the throat region turns chrome yellow. Parts of the top and base of the bill change to cobalt blue, and a black diagonal strip appears from the base to the tip. This colour change is of short duration, the intensity usually subsiding by the time incubation starts. The nest consists of a scrape in the ground prepared by the female. She digs the scrape with her bill and feet, and lines it with any scraps of vegetation or feathers within reach of the nest. Within three days egg-laying begins and eggs are laid two to three days apart. Both parents share incubation and the eggs are incubated on their feet. The first-hatched chick is substantially larger than its siblings. It receives most of the food and may even attack and kill its nest mates. A newly hatched pelican has a large bill, bulging eyes, and skin that looks like small-grained bubble plastic. The skin around the face is mottled with varying degrees of black and the colour of the eyes varies from white to dark brown. This individual variation helps the parents to recognise their chick from hundreds of others. The chicks leave their nests to form creches of up to 100 birds. They remain in creches for about two months, by the end of which they have learnt to fly and are fairly independent. Wild birds may live between ten and possibly 25 years or more. Breeding season: At any time of year Clutch size: 1 to 3 Incubation: 35 days Time in nest: 28 days I saw this Pelican in a creek in Grange, South Australia referred to as The Old Port Reach. My information came from this website: http://australianmuseum.net.au/Australia...

Thank! Your photos are so much better though! I just use my c***y iPhone :-)