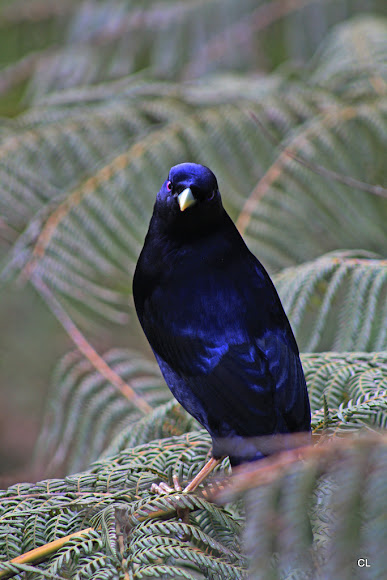 Family: Ptilonorhynchidae Order: Passeriformes Satin Bowerbirds are medium-sized birds. The adult male has striking glossy blue-black plumage, a pale bluish white bill and a violet-blue iris. Younger males and females are similar in colour to each other, and are collectively referred to as 'green' birds. They are olive-green above, off-white with dark scalloping below and have brown wings and tail. The bill is browner in colour. Young males may begin to acquire their adult plumage in their fifth year and are not fully 'attired' until they are seven.

Distribution Satin Bowerbirds are found along most of the eastern and south-eastern coast of Australia. Habitat Satin Bowerbirds prefer the wetter forests and woodlands, and nearby open areas, although those around the Atherton Tableland are largely rainforest inhabitants. Seasonal movements The mature male Satin Bowerbirds are mostly solitary, but the 'green' birds are often seen in groups or quite large flocks. In winter (outside of the breeding season), birds move to more open country, and occasionally enter orchards. At this time, mature males may join the 'green' bird flocks.

The male Satin Bowerbird is perhaps the best known and well documented of all the bowerbirds in Australia. This fame partially stems from its practice of building and decorating a bower to attract females. This consists of two parallel walls of sticks, is built on the ground, and is used as a courtship arena during the breeding season. The male decorates it with bright blue coloured objects that it collects; blue clothes pegs, drinking straws and bottle tops are among the favourite stolen items, while bright blue parrot feathers, flowers and brown snail shells, make up the majority of decorations away from human habitation. A mixture of chewed vegetable matter and saliva is used to paint the walls of the bower. The bower owner meticulously maintains it throughout the year. The breeding season runs from, and both mature and immature males build bowers and display to prospective females. On the arrival of a female, the male Satin Bowerbird leaps into a ritualised display of exaggerated movements, such as strutting and bowing, with wings outstretched and quivering, and accompanied by a variety of mechanical-sounding calls, such as buzzing and rattling interspersed with mimicry. One of the bower decorations is usually carried in the male's bill. If impressed, the female moves into the bower avenue for mating and then leaves to perform the nesting duties on her own, while the male readies himself for courting more prospective females. The female places a loose nest of sticks in a tree or bush, up to 30 m – 35 m above the ground.

Thanks Ava T-B.. and thanks Matimar1 .. Ava T-B is right.. they build this bower with blue things.. and if you one move one piece they will come out and put it back in its place..

matimar1, the 4th picture is of the bower this male makes and decorates with blue things he finds. They are amazing builders!

When I lived in the NT the Bowerbird collected everything white and creamy including my pearl necklace.. Lucky we watch them take it!

Isn't it amazing what stuff they find. Things you wouldn't think were around. And I love the way that it's nearly always the same shade of blue too.
Great shots.

I watched this bird for hours. He knows all his blue bits and if you move them around he gets really angry..

I love the blue plastic spoons in picture 4 as the male's inducement to the female to mate with him!

Please consider putting this wonderful spotting in the Animal Architecture mission at http://www.projectnoah.org/missions/8082...

Thank you and yes... these birds are amazing to watch!

Extensive and interesting work on this picture.