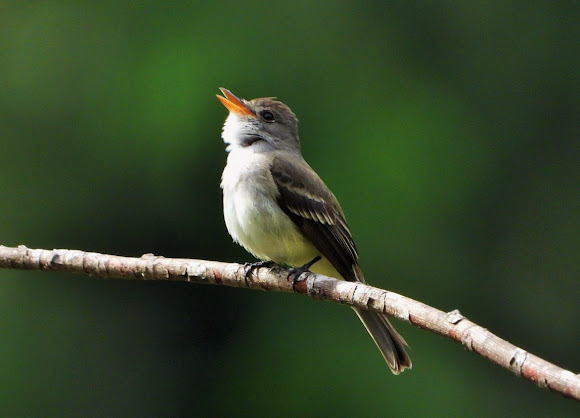 The Willow flycatcher is a small insect-eating bird. Distinguished by its yellow lower mandible and lack of an eye-ring. Its breast is pale and transitions to white at the throat. The bill is broad and has a long tail. Gray upperparts, wings, and tail. Two light gray wing bars.

Spotted in a wetland next to a mixed forest at the Flaming Geyser State Park.

This conservation note from BirdWeb: This species has declined in some areas due to loss of streamside habitat, and the US Fish and Wildlife Service lists the southwestern population as a subspecies-of-concern. Willow Flycatchers in Washington experienced significant declines from 1966 to 1979, according to the Breeding Bird Survey. During the period between 1980 and 2000, the species still suffered a decline, but to a lesser degree, indicating that there may be a reversal of the trend, or at least stabilization, in the years to come. Despite their decline, Willow Flycatchers are still very common in western Washington. They are less common and more locally distributed east of the Cascades. River-corridor channelization, overgrazing, dam construction, and urbanization all degrade Willow Flycatcher habitat. With the listing of many Northwest salmon populations under the Endangered Species Act, many rivers are undergoing restoration to improve the habitat for salmon, which should also improve habitat for Willow Flycatchers and other riparian species.

Thanks, ornithoptera80. Birds can be so difficult sometimes to ID when you need size and colors as your factors to differentiate.

After more research and several returns to this park with more pictures, I'm having doubts if this is the Willow flycatcher. It is extremely similar to the Western Wood-Pewee. These two pics aren't really good for differentiating the two. If anyone can tell me more, please let me know.