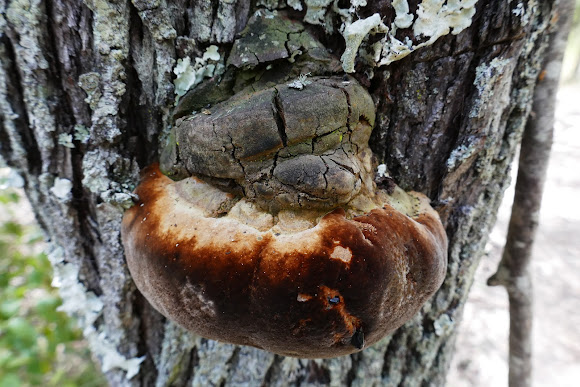 A bracket polypore and club fungi species, "horsehoof fungus" is very appropriately named, don't you think? It belongs to the family Hymenochaetaceae, and occurs naturally in Queensland. Basidiomata perennial, solitary, firm and woody, and attached by a broad lateral base. Frequently creviced when old, at first cinnamon brown, darkening to black, margin entire, reddish brown. Pore surface plane, often creviced, with a sterile border 2–5 mm wide, reddish brown to dark brown. This specimen was roughly the same size as a large apple. It's a slow-growing fungus, so this large specimen would be a few years old.

Found on the Gold Creek walking track at Gold Creek Reservoir, which lies just to the west of Brisbane. Freshwater lake and dense native bushland vegetation of dry eucalypt forests and subtropical rainforests. Moderately sunny aspect, but surrounded by much larger eucalypt species like blue, grey and red gums. This specimen was found growing on an ironbark.

I have noticed there are three tree species (in this area) that these fungi seem to prefer, and all are Australian natives - red gum (Angophora leiocarpa), northern grey ironbark (Eucalyptus siderophloia), and broad-leaved red ironbark (Eucalyptus fibrosa). Perhaps this is because these trees are all heavily-resinous species? There seems to be a connection here. I have never seen this species on a dead tree either, whereas a similar species (Phellinus badius) is found frequently on dead wattle trees. In the Bunya Mountains to the west of Brisbane, the preferred tree species seems to be Queensland red cedar (Toona ciliata), although this is not a resinous tree.