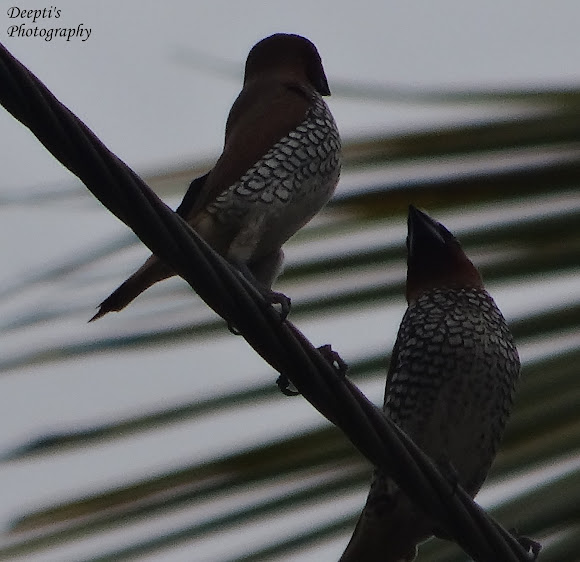 Subspecies:- L. p. punctulata. Black beak, reddish chocolate brown head, body, and wings, breast and flanks white with dark edges on the feathers in a scallop pattern, white belly and undertail. They feed both on seeding heads on grass stems, as well as on ripe seeds that have fallen to the ground. Common names:- ‘Scaly-breasted munia’, ‘Spotted munia’, ‘Nutmeg mannikin’.

Grasses and weeds within gardens or near rice fields, open or semi-open country with shrubs and trees.

Scaly-breasted Munias are highly gregarious and forage in small flocks. A large flock foraging in grass would move in a regular pattern. First a few birds would move forwards, followed by another few, and so on in waves. Or the birds at the back would leap-frog over the birds in front. Once a grass patch is thoroughly worked through, the whole flock would fly off to another patch. Smaller flocks feed haphazardly. At the end of the day, they may gather in flocks at the topmost branches of a bare or open tree, calling to each other. They then disperse to roost in smaller groups or pairs within nests, even outside the breeding season. Sometimes, up to a dozen birds may squeeze into a nest. These roosting nests are spread far apart.