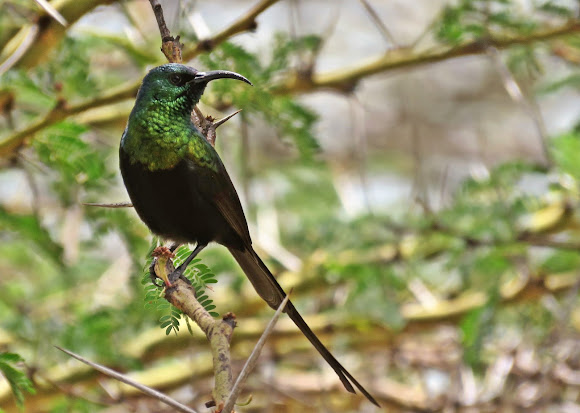 CORRECTION - at first, I wrongly identified this bird as Tacazze Sunbird; this was just corrected this morning (16.11), thanks to discussion with African Bird Club members. The bird is in fact Bronzy Sunbird. As my 100th bird spotting on project NOAH, I've chosen this stunning long tailed member of Sunbird family (Nectariniidae). The breeding male (pics No 1, 2 and 6) of Bronzy Sunbird looks very dark, but shines with blue-bronze-green. It has glossy dark green back, breast and wing covers, with golden-green shiny patch on shoulder; its green head can be confused with some other long-tailed Sunbirds. The non-breeding male lose most of its iridescence. The female of this sunbird (pics 3 - 5) is also stunning, but like all female of this family, much less brightly colored. It is dusky grey to olive green above, with dark lores, whitish superciliums and white-cream throat. The female has shorter tail.

I saw this bird the first late afternoon after my arrival to Elementaita, but no good shot came from that encounter. And I grew quite desperate as days were passing, and I did not see it clearly in that bushy vegetation. And then, the last afternoon of our stay, these two came out of those acacia shrubs, and I had the impression they were posing for photos. I got them both from various angles, many times, and they did seem undisturbed... Shortly, great experience.