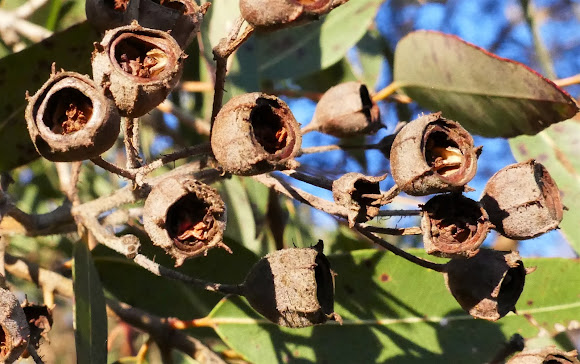 This tree caught my eye immediately due to its amazing shape. Angophora woodsiana, commonly known as "smudgee apple" (also smudgy) and "rough-barked apple", is a tree of the family Myrtaceae found in northeastern New South Wales and southeastern Queensland in Australia. The gumnuts are also quite distinctive as they are cup-shaped and longitudinally ribbed, with a descending disc and 3 or 4 enclosed valves. This species belongs to a group which is diagnosed by the rough bark and petiolate adult leaves in the mature crown. The other members of this group are A. bakeri, A. inopina, A. floribunda and A. melanoxylon. However, another species I have seriously considered is Angophora subvelutina, commonly known as "broad-leaved apple" (also broadleaf). It's a very similar species that is also known to occur in this area, and would be my second ID choice - https://www.anbg.gov.au/cpbr/cd-keys/euc... One feature I have looked at closely between the two species is how the gumnut stalks attach to the stems of the tree. A. subvelutina has an obvious clasp on the stem whereas A. woodsiana doesn't. I think this spotting is the latter.

New England District of the Northern Tablelands, NSW. Rural landscape (sheep and cattle farm), but large areas of natural bushland vegetation in the area. This tree was in a sunny location on sandy soils, found near Yoongan Creek which is currently dry. Drought conditions still persist.

This tree has the most amazing protection around its base, and nothing will go near it at ground level - https://www.projectnoah.org/spottings/20...