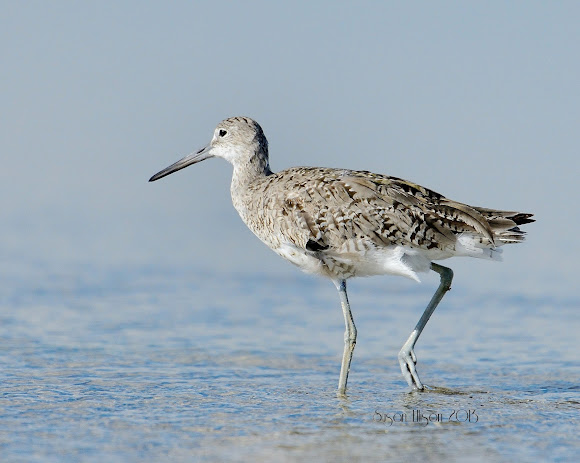 Willets are large, stocky shorebirds with long legs and thick, straight bills considerably longer than the head. Their wings are broader and rounder than those of many shorebirds and the tail is short and squared off at the base. Willets are gray or brown birds that, when flying, display a striking white and black stripe along each wing. In summer, Willets are mottled gray, brown, and black; in winter they are a more consistent plain gray. The legs are bluish gray

Along both seacoasts, Willets inhabit open beaches, bayshores, marshes, mudflats, and rocky coastal zones. Their widespread wintering range makes them one of the easiest shorebirds to spot. During the breeding season, western Willets occur far inland, where they nest near marshes and other wetlands, prairie pothole ponds, and wet fields. Eastern birds seek saltmarshes, barrier islands, and barrier beaches for breeding. In winter, Willets feed on beaches and rocky coasts, as well as mudflats and marshes. During breeding season the western population moves far inland to nest in grasslands and prairies near freshwater. Eastern Willets breed in coastal saltmarshes and on barrier beaches and islands.

•Although both parents incubate the eggs, only the male Willet spends the night on the nest.