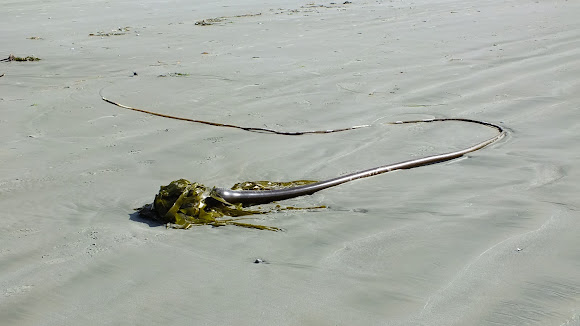 Bull kelp are a common species in offshore kelp forests along the Pacific coast of North America as this species prefers colder water with a temperature range of 3.9 to 15°C. Kelp have a similar but not identical physical structures to terrestrial plants. For example, a holdfast anchors them to the ocean floor and is similar in appearance to a terrestrial plant’s root system but does not collect nutrients like real roots would. They also have a stem-like structure called a stipe from which leaf-like blades stretch out through the water, absorbing nutrients and sunshine. Below the blades is an air-filled bladder called a float. As the name indicates, the float helps hold the plant upright in the water. There’s one other way these large algae differ from terrestrial plants – they don’t produce flowers, but rather reproduce by releasing swimming spores into the water. Although bull kelp is a type of marine brown algae (Phylum Phaeophyta), it often appears green in color and can be frequently found washed up on beaches, especially after winter storms. Aside from the important role it plays in marine ecosystems, bull kelp is also harvested and used by people as an edible seaweed. Kelp beds are also important to both commercial and recreational fisherman due to the number and diversity of fish which live in these habitats.

Bull kelp grows in exposed, turbulent areas, often at the edges of giant kelp beds. It forms dense kelp beds on subtidal rocks and can be found as deep as 17 meters. They form large kelp forests that provide important sheltering habitat for young fish and invertebrates, including urchins, sea stars, snails and crabs. These forests also provide habitat for sea otters since sea otters eat the invertebrates that live on the kelp forest floor and the kelp itself provides a canopy which the otter can anchor to while resting to keep from drifting away.