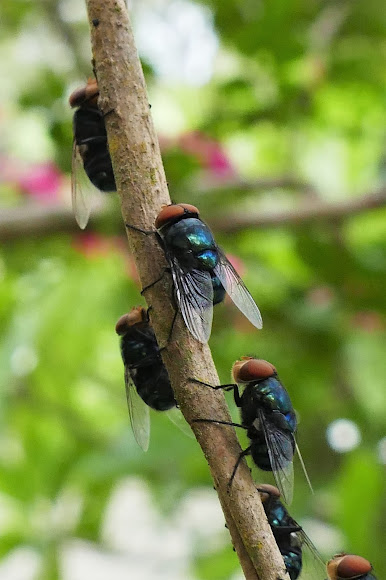 Chrysomya megacephala, commonly known as "bluebottle blowfly" and "oriental latrine fly", is a member of the family Calliphoridae, and subfamily Chrysomyinae. I spotted this small group of a dozen flies resting on a suspended piece of loose bark. They would fly a short distance away but always returned to this same resting spot. Each fly was roughly 8mm in length, and the most distinguishing features were the large red eyes and metallic blue tinge of the abdomen and thorax. These photos were taken in the shade on an overcast day, so it doesn't really pick up the blue colour, and looks black instead. Also, when compared to other blowflies, they look relatively hairless, although upon closer inspection the hairs are very fine. PS: Another species also considered for spotting ID was from the same genus - Chrysomya saffranea, aka "steelblue bluebottle".

Suburban backyard in Brisbane, Queensland. These specimens were spotted on the curled, shedding bark of a crepe myrtle. The tree was in flower. We've had substantial rainfall these past few weeks, and being summer, conditions are warm/hot and humid.

These are the carrion breeding flies. Their larvae feed on rotting fresh which accelerates the breakdown of carcasses and the return of nutrients to the environment. However, they have also adapted to breeding on live sheep, and cause huge problems to Australian sheep industry. Blowflies also pose major health risks to humans as they can transmit disease. The Wikipedia reference has plenty of information on these risks and the species as a whole.

Ohmygoodness I laughed so hard :D

Exotic is the right word :D I find that if I can shoo them outside - with an explanation about how it's better for them - then great otherwise...I see a lot of these on the clothesline (might be different but they are the same blue and everything), generally in the morning but other times of day as well.

Thanks, Liana. I kind of felt the same, and did think at the time would I be so ready to kill one if it got into the house, particularly knowing it could be one of these. Time will tell. And that name is so exotic, hey!

"Oriental latrine fly"! Oh that is hilarious :D As much as these critters can be annoying they are quite a pretty fly and I quite like them. Great series and fab notes Neil! Thank you for sharing :)