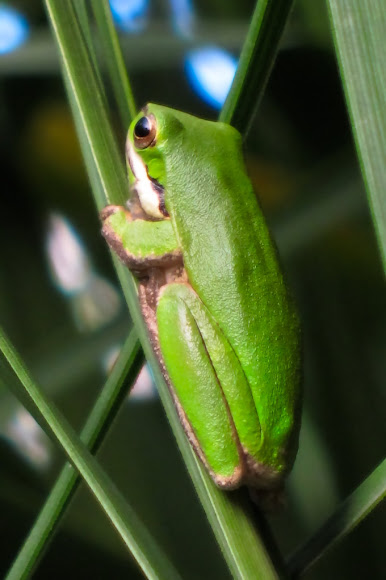 The Eastern Dwarf Tree Frog or Eastern Sedge-frog (Litoria fallax), is a very small and common tree frog found on the eastern coast of Australia. Females can reach a maximum size of 25-30 mm, while males may only reach 20 mm when fully grown. The tadpoles are larger than the adults.

This frog is associated with a wide variety of habitats, including coastal swamps, lagoons, dams, ditches, and garden ponds in forest, heathland, wallum country, and cleared farmland. It lives in reeds and similar plants both near and away from the water, and often inhabits banana trees in the northern areas of Australia, and are sometimes shipped with the bananas throughout Australia. They are known in Australia for becoming lost frogs by turning up in fruit shops outside of their normal range. This fellow was spotted on one of my ponytail palms (Beaucarnea recurvata).

I've been hearing this little guy for about a month. Apparently this is a very common species in Eastern Australia, although this is my first encounter. I have a reasonably lush garden so I'm surprised I've not seen one before now, and I've lived here for over 9 years. Decent rainfall these past few weeks must have lured him out of his hiding spot.