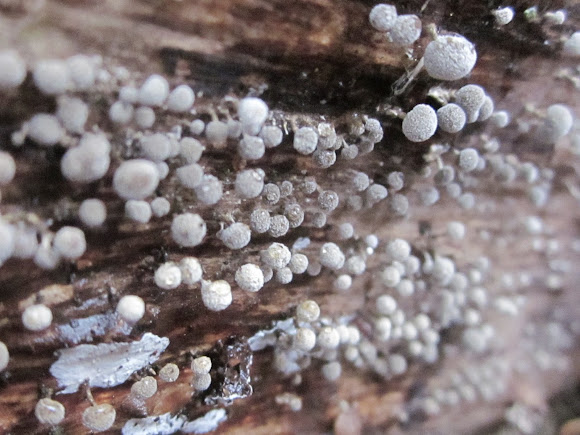 yes stay, at least a while. i need someone, who corrects my id. and has at least also expirience at that area. Nice spotting, i wish my camera was also this clear. that's, unfortunately, but the month is almost over!! take a break. :))

added to: Myxomycetes (Slime Moulds) of the World - mission . you're welcome clive, i'm happy to be part of your, needed substitute mission !! thumbs up :)) And most important for me, i/we get to see your fresh made spotting , finally.!!

thank you very much. I will look put that infos to use. Maybe you had seen that this spotting was first: physarum or didymium ? Then 2 days ago, i had reposted it as physarum (thought it would be one), i still have some specimen, will analyse them, the next days. try to figure out WHERE the lime-crystals are hidden. what do you think of didymium minus ?
forgot to mention: the white head/columella is good to see, at the second picture, the right side. !!

hi clive. YES. now i have a microscope, about 1 week. That was next lazyness and holidays, one reason, why i wasn't online the recent days. With the microscope, schould i practice more. Do you know some good spore-keys for slime molds and maybe also (except yours,dol,eol,eumycetoan project), some good site for refferences. I really love your spottings so far, and the hidden forest became one of my favorites. -- back to above : there were only one branch, on this branch 3 site are with fruitbodies, on these seperated sites (above= to me, left= ground/underside) where few clusters. all clusters from above were pointing into the sky, the at the left site, were more bent downwards, and the underside were also downwards. Pro cluster or site, were the f.bodies almost look-alike, in size-matter. above were the biggest, left and down were smaller. At picture 3: right in front: the left one has a grey- head and the right a little white head. At my microscope session: were i preparing a glass, i tried to cut the grey-head, but he fell off and uncovered the little white head which were attached to the stem. As a m&m: the nut is the white head attached to the stem and the grey head is as the chocolate around it (darker at the inside). WHAT IS YOUR OPINION ? (i'm almost sure about the "slime mold", i doubt some sort of asco/basidio-myceten!) will try to get more activ again,so till next time!!

thanks laura, who's thinking this isn't beautiful ( :) ) . the dutch name ruffly translated means: " Small spotted, CRYSTAL cup" - so even the name says beautiful. no serious- thanks for your comment

Alex, please could you take a look at this for me? http://www.projectnoah.org/spottings/794...

Wow, so cool!! They look like tiny, snow covered trees :) I love it when photos show off the beauty of organisms people don't think of as beautiful.