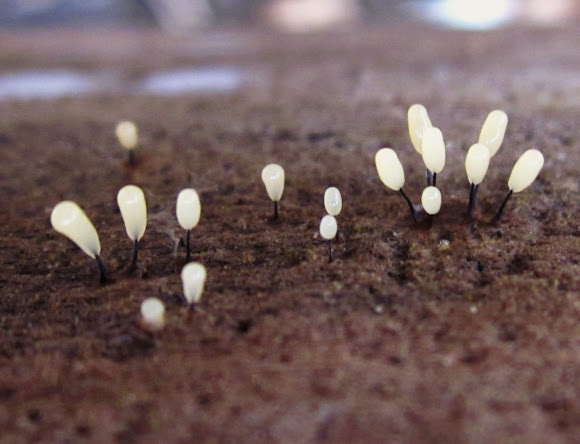 PLASMODIUM translucent white. SPOROCARPS scattered or in small groups, up to 9 mm tall, though smaller and always ± spherical in moist-chambers. STALK usually at least 66% of the total height, black, consisting of netted fibres at least at the base. COLLUMELLA reaching at least half way up the sporotheca but usually almost reaching the apex, where it merges into the capillitium. [Here the matured specimen---> ( http://www.projectnoah.org/spottings/852... ). Here are the spores of this spotting---> ( http://www.projectnoah.org/spottings/851... )]

my first thought were stemonita......?, they had a thin wire-like black stem/stalk and jelly-like white/yellow plasmodium,which as in my previous spotting (stemonitis sp.),not ball-shaped but more like tubes,was. After i came home and looked at my discovery, the yellow tube was changed into a black ball-shape. At this spotting i found a little guest, when i looked through the microscope ---> ( http://www.projectnoah.org/spottings/851... )

thanks, you 2. This ( http://www.projectnoah.org/spottings/851... ) was also hidden between the specimen of this spotting!!