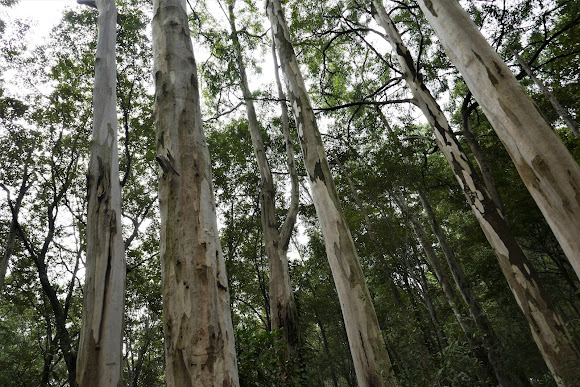 Eucalyptus punctata, commonly known as "grey gum" or "grey irongum", is a large tree of the family Myrtaceae, and is an Australian native. Grey gum is also a common name for several similar eucalypts - https://en.wikipedia.org/wiki/Grey_gum and this species is one of four related species of large-fruited grey gums. Its leaves are one of the favoured foods of the koala (see notes). The grey gum grows as a large tree to 35 m (115 ft) high, with bark of various shades of grey, white and orange hues, which sheds in large sheets, giving the trunk a patchy appearance. White flowers appear between summer and autumn. Trees can live for over one hundred years.

In Sydney, grey gums grow in tall, open sclerophyll forest, and are widespread on hills and ridges with shale and sandstone soils. Range is mostly from Nowra to the Hunter Valley, but also occurs less-frequently as far north as Queensland. This spotting was in the Cumberland State Forest, in Sydney's northwest. https://www.forestrycorporation.com.au/v...

This is also a really important food tree species for native wildlife. The grey-headed flying fox (Pteropus poliocephalus) eats the flowers, while the leaves form a staple of the diet of the koala (Phascolarctos cinereus). Leaves in winter contain less nitrogen than those in summer, which the koalas make up for by eating more in winter months. The brown-headed honeyeater (Melithreptus brevirostris) and yellow-tufted honeyeater (Lichenostomus melanops) have been observed eating gum exudate from the stems. Fieldwork at several sites around central New South Wales showed that the red wattlebird (Anthochaera carunculata) and noisy friarbird (Philemon corniculatus) preferred to forage on the foliage of the grey gum over other trees, with the former appearing to oust the latter if both species were present. (Wiki)