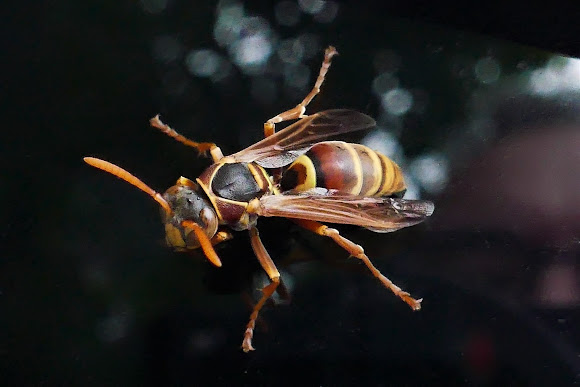 Polistes humilis is a species of wasp in the Vespidae family, and is an Australian native. It can be identified by its slender body structure and banded colouring. Adults have yellow faces and are 10-15mm long with a tannish-red colouration, and males can be distinguished from females by a yellow markings on the abdomen area. Paper wasps, like all ants and some bees, are social insects, with each nest being a colony of females. Only one female, the queen, lays all the eggs. All the other females are workers. Polistes humilis is important to the overall ecosystem as these wasps are pollinators.

Spotted in a native garden at the Metroplex on Gateway estate, Murarrie, Brisbane. The species is mostly found in southern Queensland, New South Wales, Victoria, and South Australia. It was also accidentally introduced into New Zealand.

A similar species is Polistes variabilis, aka "common large paper wasp". It looks almost identical to Polistes humilis but is larger, reaching a length of 20mm. There are 11 different Polistes species found in Australia, and P. humilis is the most prevalent. Historically, P. variabilis has often been misidentified as a sub-species of P. humilis, but recent photogenic analysis has indicated that these are two separate species.... http://www.brisbaneinsects.com/brisbane_... Some excellent photos.

Thanks, Tukup. They're quite fascinating and beautiful creatures.

Yeah, it was on my car, parked under trees in the jungle.

Amazing shot. Is it on glass?