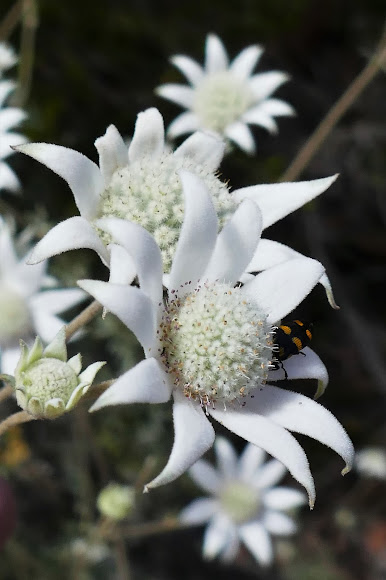 The Flannel Flower is a herbaceous shrub growing up to 50 cm (18 in) high, sometimes higher. The creamy-white flowers occur in clusters, and the entire plant has a soft woolly feel due to the presence of soft white hairs, hence the name. Despite having a daisy-like appearance, the Flannel Flower is in fact a species of the Apiaceae family, the same family as the carrot, dill, celery and parsley. Flowering occurs in spring to early summer (September to December) and is followed by fluffy seeds in a globular head. The seeds are dispersed by wind. May also be profuse after bushfires. It is an iconic native plant, particularly in Sydney, and has been used in imagery and art since colonial times. It is also Australia’s symbol for Mental Health Awareness (see notes). The small beetle on this flower is a Castiarina sp. Jewel Beetle, and belongs to the family Buprestidae, one of the largest genera of beetles in Australia. They emerge during the spring and summer months to coordinate with the flowering of native plants. PS: Massive fires swept through Girraween two months later, in mid-February, 2019, and it will take years for some species to regenerate. This entire area was burnt to a cinder, and I can't help but feel sad for the wildlife that has been destroyed because of one careless human act.

Open forest and woodland, usually on sand or sandstone on the coast and mountains of New South Wales and southern Queensland. In this area, mostly granite soils, and this section of track was quite exposed with a sunny aspect, although on the lower side of a large granite slab, so water runoff keeps the undergrowth and leaf litter quite moist during dry periods. Spotted along the Mt. Norman track in Girraween National Park. Here's some park info - http://www.rymich.com/girraween/

Quoting directly from Mental Health Australia's website: "The Flannel Flower, an Australian native, has been chosen as the national symbol to promote mental health awareness in Australia. The Australian bush has an inherent beauty and strength. It is also known for its extremes of weather and landscape. Varieties of the Flannel Flower are commonly found growing wild in the bush throughout Australia. The Flannel Flower, as with all native Australian plants, needs to be adaptable and enduring in order to survive. In the same way all of us, regardless of our life circumstances, develop resilience and the ability to adapt to change, in order to maintain good mental health. Being open and empathetic to a person’s expression of distress can assist in the recovery of a person living with mental illness and change the negative attitudes of our society as a whole." I myself am an epileptic, so this flower which I have always been drawn to and admired, now has a very special meaning for me.

Oh wow, thank you for this SOTW. I think flannel flowers must bring me good luck too. And thanks Antonio, Sarah, Sukanya, Leuba and Michael. I appreciate your congrats :)

Great series Neil,beautiful flower and great notes as usual,congrats on the well deserved SOTW and thanks for sharing

You've done it again Neil, your Flannel Flower has been voted Spotting of the Week! An interesting and perfectly completed spotting as always from you, but you also go the extra mile by bringing in more: with your spottings we follow you on your walks and share some of your life. Consider this an unofficial award for top meaningful spotter!

"Its soft and creamy white aspect and star-like shape are evocative of a Northern Hemisphere winter, but our Spotting of the Week is an Australian endemic! The Flannel Flower (Actinotus helianthi) is native to sandstone heathland in coastal New South Wales and Queensland. A member of the Apiaceae family, it flowers in spring and can thrive after bushfires. Adaptable and resilient, it has has been chosen as a national symbol to promote mental health awareness in Australia".
For more information: https://buff.ly/2BrPOJd

Thanks, Leuba. They aren't as abundant as they would usually be, so the drought has obviously slowed things down a bit. But the little groups I did see were very healthy, albeit fewer in number. There's still plenty of time, and I was so happy to spot these.

Thanks for the notes Neil. They are gorgeous flowers and the shots of them in the bush are so beautiful.

Thank you, Maria and Sarah. The MHA quote is quite special, as are the flowers. They are definitely a favourite of mine and it's always a joy to spot them, and there's a 'presence' about them that not all plants have. Perhaps it's the soft texture that calms the emotions? But I don't always have to touch them to sense, because the visual connection is as strong as the tactile one. I sense the same with many flowers in the Proteaceae family as well. The Australian bush is a very healing place for me :)

Such PRETTY flowers & what a beautiful national symbol to promote mental health awareness...
:)

Wonderful spotting and especially like the information in the notes. Thanks for sharing this!

Thank you so much for the nomination, Ashley.

Thank you, Ava. Nature is always the perfect metaphor. Being open and empathetic to a person’s "expression of distress" rings true with me. My own mental condition has helped me to be more observant of others, and more accepting of them and their sometimes erratic behaviour. I think when people feel accepted and not judged, the beauty of their character can shine through the stigma that people assign to the sufferers of mental illness. People are people and none of us are perfect. We all have a burden to bear, in whatever way it manifests in our lives.

Thanks for this Neil; I'm a mental health professional and I love this description of nature as the strength and resilience we need to be well.