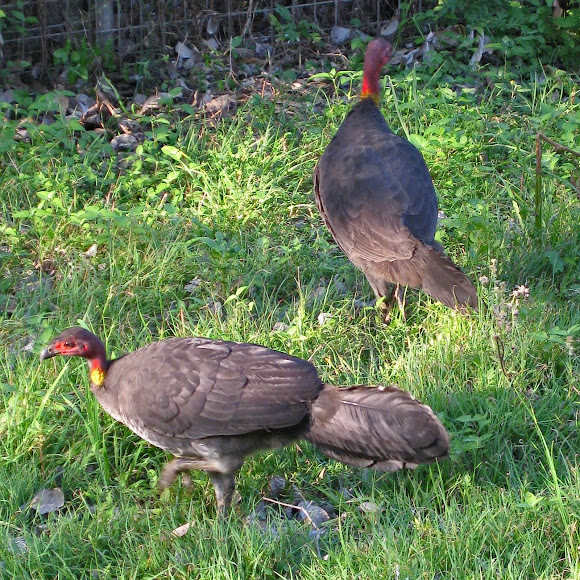 The Australian brush turkey, aka scrub turkey or bush turkey, is one of three species in Australia known as the megapodes, or 'mound builders'. All three species build mounds to incubate their eggs. All are communal, forming communal nests. The brush turkey is an unmistakable bird with a featherless red head, yellow wattle (loose skin around base of neck) and black body. Males and females look similar but during the breeding season, the male's wattle is larger. Adult birds are 60–75cm long with an 80cm wingspan. Average weight is about 2.27 kg. Chicks have all-brown feathers for camouflage. The species is now a familiar sight right into the inner suburbs of Brisbane, as it is with most urban centres within its range. However, they were hunted by the early settlers and during the 1930's "great depression" for food, and it was then supposed that the bird was approaching extinction. Today, the greatest threats are loss of habitat due to land clearing, urban areas encroaching into native vegetation which brings turkeys into conflict with people, and introduced predators, especially cats, which kill many vulnerable chicks. Another good resource: http://www.wildlifeqld.com.au/Brush_Turk...

Inhabits rainforests and wet sclerophyll forests, but can also be found in drier scrubs. In the northern part of its range, the Australian brush turkey is most common at higher altitudes, but individuals move to the lowland areas in winter months. In the south, it is common in both mountain and lowland regions. Their distribution is along the east coast of Australia from Cape York to south of Sydney. They mainly occur along the coastal fringe, east of the Great Dividing Range, but with some populations in the drier areas west of the divide. Brush turkey colonies are common in most urban environments in these regions.

I had five brush turkeys in my yard during 2010-11, three of which are pictured in this series, and to the best of my knowledge all three are female. There were also a number of young chicks that hatched during this period and several of them were spotted around my yard, but due to natural attrition, only two survived. From the moment they hatch as young chicks they are left to fend for themselves without any parental care, and predation takes its toll. Just prior to the Brisbane Flood in 2011, two young chicks called my yard their home. I was worried that they wouldn't survive the flood but upon my return the following week, both chicks were present. They grew and were two of the group of five, but as they matured they left for their own territory, or I assume they did. My cats and the birds had an uneasy truce and simply tolerated each other, although the cats would occasionally ambush and chase them... just for fun! On the odd occasion they would also catch a chick, although rarely did they kill them. I usually had a chance to rescue the chicks and the cats only seemed curious, simply patting the chicks to hear them squawk. Other than that, I would find cat and bird sitting quietly together, the chicks frightened but unharmed. Go figure!

Sukanya, you are welcome any time.

I am dusting off my passport ...Down Under here I come.

Thanks, Sukanya. It is very interesting. Also bats, birds, lizards, possums, etc. It's all good fun, and to think all of these things occur and I only live 3-4 kms from Brisbane's CBD.

Great story...your Yard is an interesting place..pythons, brush turkeys and what not!!!