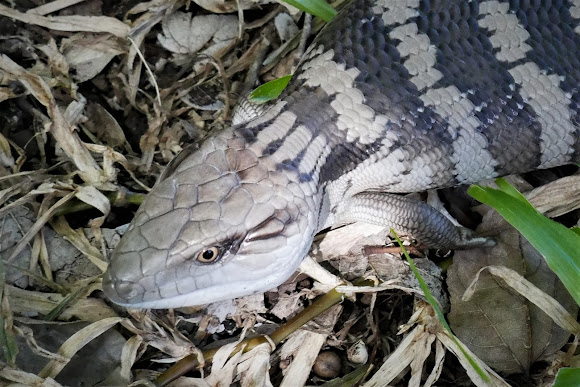 The eastern blue-tongue lizard (Tiliqua scincoides scincoides) is a subspecies of large skink which is common throughout eastern Australia, often found in bushland and suburban areas where conditions are suitable. The lizard is known as "blue-tongue" because its tongue can range from bright to dark blue, and it has a habit of displaying it prominently and hissing loudly when disturbed (see my notes below). Adults can grow to almost 60 cm in total length, of which about 36 cm is head and body, but I doubt this one was even 30 cm in total length, nose to tail. I've not seen this individual before today, but my first impression was it was a young lizard. Diet includes insects, snails, fruits and flowers and small vertebrates, and they will take advantage of unattended dog and cat food as well. Loads of information can be found at the reference links. PS: I also have cats, but they don't pose any threat to 'adult' blue-tongues. These lizards have enough sass and the cats enough sense not to mess with one another, and that is what I have witnessed when they've had face-to-face encounters. Dogs, however, pose a real threat, and sadly, from personal experience, so do lawn mowers :( Magpies and kookaburras can also take their toll, particularly on younger animals.

Virtually all habitat types excluding arid regions and rainforests. Shelters under fallen timber, ground debris and in hollows. Very common in suburbia and found throughout Brisbane in virtually all suburbs except areas with high elevation and rainforest. They are often seen in my garden, and there are plenty of places amongst the rocks, shrubs and undergrowth to call home. This one was out on the grass, most likely sunning itself. Temperatures are starting to drop as autumn progresses.

A combination of bare feet, hanging the laundry and not watching where I was treading, plus a disturbed blue-tongue lizard all set the scene. I almost trod on this one, and all I could do was squawk loudly and leap backwards (I'm glad it wasn't the python). The 4th photo is actually the 1st, and it shows total length. As I moved in closer, it hissed, flattened its body and crouched (to make itself look bigger). I moved in closer still... and it charged me!... broad blue tongue flashing madly, body flattened, and steady yet deliberate strides in my direction, and with no intention of backing down. But backing down was my only strategy. It was difficult to watch the screen and the lizard at the same time, particularly when it was moving in my direction, and my primary concern was for my bare feet! It shot off into the undergrowth - last photo you can see the tip of the tail, and the entire duration from 1st to last photo was about 15 seconds. A terrifying ordeal haha, and I kicked over the laundry basket too. Here's an adult specimen I spotted here a few years ago, and you can see the colour variation. It also lost its tail at some point - https://www.projectnoah.org/spottings/21... I'll try and get some photos of my new resident's blue tongue next time I see him/her.

Blue-tongues are definitely a favourite of mine. Great photo.

I do too. These would be the largest lizards to visit my yard, although I have seen the occasional juvenile water dragon. Rarely though.

i love these lizards.