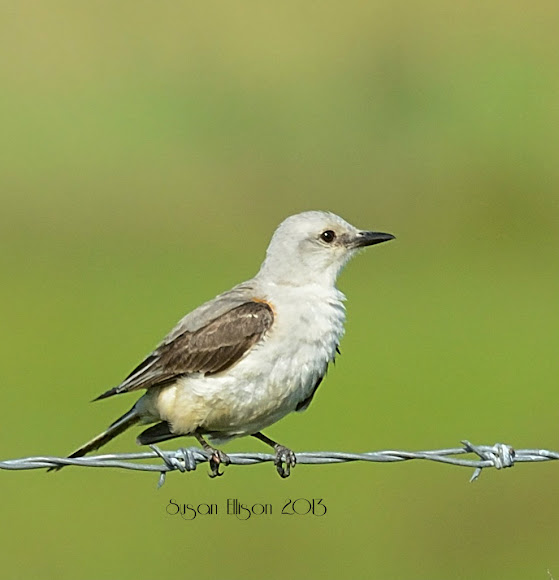 An elegant gray and salmon-pink flycatcher festooned with an absurdly long tail, the Scissor-tailed Flycatcher is the bird to look for on fence wires in the south-central United States. They typically perch in the open, where their long, forked tails make an unmistakable silhouette. The tail proves useful as they expertly catch insects on the wing with sharp midair twists and turns. In late summer and early fall, scissor-tails gather in large, bickering flocks to migrate to Mexico and Central America

Scissor-tailed Flycatchers breed in savannas with scattered trees, shrubs, and patches of brush in the south-central U.S. and just over the border into northern Mexico. They also breed in towns, farm fields, pastures, and landscaped areas like golf courses or parks—areas with a mixture of feeding perches, open space, and trees for nesting. Scissor-tailed Flycatchers spend the winter in southern Mexico and Central America, in humid savannas, pastures, agricultural lands, scrublands, villages, towns, and the edges of tropical deciduous forests. They commonly stay below 5,000 feet elevation but occasionally winter at up to 7,500 feet. Sometimes they roost in towns and disperse to the countryside to forage

The Scissor-tailed Flycatcher uses many human products in its nest, such as string, cloth, paper, carpet fuzz, and cigarette filters. One study of nests in an urban area in Texas found that artificial materials accounted for 30% of the weight of nests.

Cute, almost scratching its chin in the second pic :-)